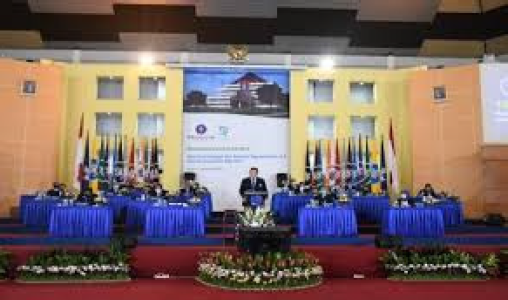 Congratulations were also conveyed by the Minister of Education and Culture, Nadiem Anwar Makarim. Nadiem expressed his pride in the achievements and achievements of IPB University. Meanwhile, Prof. Dr. Arif Satria, Chancellor of IPB University explained the picture of disruption due to the industrial revolution 4.0 and the biological revolution which is a challenge to determine the strategy for higher education to create a future superior generation that can adapt.

IPB University has responded with the presence of 2020 curriculum education to produce a powerful agile learner by combining a mindset and skillset with a grown mindset in order to be able to produce graduates of a generation of learners, honest, have a high social spirit, high communication skills, able to solve complex problems, integrity also have the ability to work together. Relevant innovations are continuously developed in response to disruption and revolution in biology. IPB University with the tagline “Inspiring Innovation with Integrity” is expected to always inspire and bring optimism to always inspire with innovation.

Apart from the President and the Minister of Education and Culture, greetings also came from the ministers of the Advanced Indonesia Cabinet. Namely Menristek / Head of National Agency for Research and Technology, Minister of Forestry and Environment, Minister of Cooperatives and Small and Medium Enterprises, Minister of Villages, Development of Disadvantaged Areas and Transmigration, Minister of Marine Affairs and Fisheries. Indonesian Ambassadors for friendly countries, local officials, and chancellors from partner universities from within and outside the country, farmers, breeders, fishermen also congratulated them through video shows.

This event was attended by the leadership of IPB University who attended the Graha Widya Wisuda (GWW) with health protocols and invitations from the chancellors of universities in Indonesia, institutional partners, alumni, lecturers, educational staff, and students through the zoom application and youtube IPB TV.